In 1851 U.S. Indian Agent Redick McKee negotiated eighteen treaties throughout California. Unfortunately none of those treaties were ratified, and the associated Indian Reservations were never created. On May 6, 1905, under the authority of the 1891 Forest Reserve Act, President Theodore Roosevelt set aside the Klamath Forest Reserve thereby claiming the entire 1.04 million acre Karuk Aboriginal Territory as public land. This action effectively left our Tribe without recognized title to our own land, including 117 recognized villages and associated hunting, gathering, and fishing areas along the middle portion of the Klamath River. Many of our traditional villages were homesteaded by non-Indians or claimed for mining and later patented. Approximately 63 of our members were allotted an average of 11 acres through the 1887 General Allotment Act .

Through the hard work of our elders, who raised the money to purchase our first two properties in Orleans and Happy Camp in the 1970's, along with the direction and frugality of our Tribal Council and staff over the years, we have managed to acquire 1,661 acres of our aboriginal land. We have had the U.S. place 900 of those acres into trust status. Most of this land is utilized for tribal housing, ceremonies, and resource management.

The mission of the Karuk Office of Tribal Lands Management is to expand Karuk Indian Country  and manage our tribally owned property to it's best use for the benefit of our members. 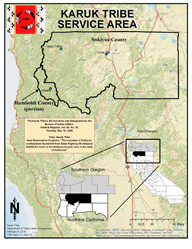 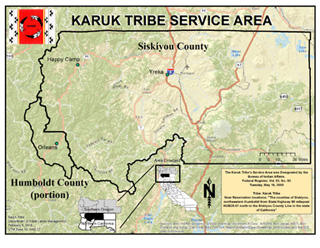